It Begins With a Call (Part 27): A Healing Pilgrimage

When we left for our trip to Hawaii in November, we decided to look at it as a healing pilgrimage.  Both of us felt stressed and in need of a vacation.  Why?  We’re retired, with a good home, family, friends, interests.  But then there’s the state of the country, the world and the earth, and our issues around growing older.  I guess that’s enough.  We are in the heart of the dark of the year, and the whole year has been pretty dark.

In any case, we didn’t even realize how much tension we were holding in our bodies until we got there.  It took a while to let go and really feel like we were there.  Staying at an old favorite place where the ocean pounds against the sea wall constantly, enveloped in those rhythms and sounds, we began to relax.  For the first two weeks, Barry did not have his chronic backache, and I did not have either stomach or lung issues.

Wave after wave,
large and relentless,
roaring as they slap
the sea wall.
They thrum in my body –
the sound –
the rising and falling –
the aliveness.
Like a huge animal,
awake and in motion,
the power of the ocean
cannot be denied.
And yet,
even in its immensity,
it brings rest and peace,
impersonal yet affecting,
mine to revere,
to love,
to treasure.

The blessing of Kona. 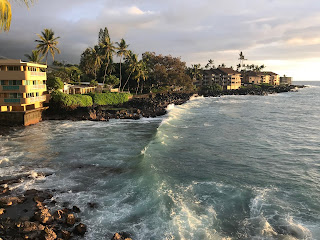 I did a two-card SoulCollage® reading and saw that anger is my theme, and that my place is on the edge, in the borderlands.  The message:  You do not “win” by denying the mud realm; neither does it serve you to ignore the Otherworld.

Anger.  My issue from childhood.  My mother called me “Mad dog” when my lower lip protruded in my distress.  Socialization by humiliation. (Oh, Mom, I know you meant well, but this was true for me.)  That little girl, full of fire and outrage, never learned how to relate to it besides being ashamed.

Pema Chodron advises to stay with our habitual patterns, that they are our way out.  Okay…  The Big Island is definitely the place to work on/with fire!  The whole island is a fire shrine and an edge place.

Several days later into the trip, I did a four-card reading around working with/on the anger, and here is a little story the cards told:  Looking for healing, a woman fittingly goes to the goddess Hygeia.  She discovers that she must temper her fire with earth energy; the earth also knows and houses fire. She also hears that she can be appropriate with her anger if she remembers not only to use earth energy, but also to balance fire with water and with the depths of her knowing soul.

She may reconfigure that fire of anger by: 1) acknowledging it; 2) asking what is behind or within it; 3) determining its best use or expression.  Finally, she needs to access joy, despite it all, because of it all.

The steps of the healing pilgrimage gleaned thus far: to relax and settle into a more open state; to acknowledge what needs healing; to look deeper, through writing and through dreaming.

Posted by Maya Spector at 1:18 PM No comments:

It Begins With a Call (Part 26): Redwood Dreaming

More on redwood trees (continuing from the last post) … 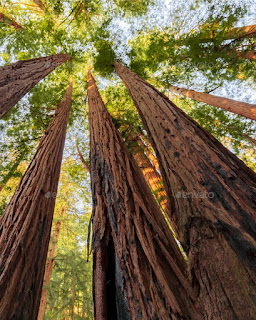 I had a dream about them and the teacher.  In the dream, she is bringing a group of us to a redwood forest to perform a ritual.  I am stunned by a particularly beautiful and huge redwood tree and go to hug it, while the others sit down next to a creek.  When I join them, I see that a group of young people is approaching from across the creek.  We get up to go somewhere more private.  The scene changes - we are now in a retreat/spiritual center where there is a large room with an altar and many Native American artifacts.  The teacher hands me two slender rattles and tells me that although I will need to share them with another person, I’m to use them while I dance in the ritual.  She then goes and lies down underneath the altar table, to begin the ritual.  I go back to pick up the rattles and see that someone else has already taken them, so I pick up a larger gourd rattle to begin to rattle and dance.

I had been considering getting a phone consult with her for a while, and after having the dream, I decide to go ahead and schedule one.  In preparation, I listen to the recording of the one-on-one I had with her at the intensive last June.  It turns out that I had forgotten a lot of it.  We had talked about my sense of what my mandate is at this time.  I told her that I knew I had the ability to hold space, and that my sense was that my mandate was tied to that.  We talked about what holding space meant to me, and she spoke now of me needing to do it not only for/with people, but for/with the trees.

We then (in the phone consult) talked about fire, and how last year at another workshop I had written a powerful fire piece that led her to say that I was to carry fire (recounted here).  Six months later, I developed lung or pulmonary problems after the ash from the fires up north drifted here.  I wondered if it happened (even partially) due to my inability to carry fire appropriately, or if I’m overly sensitive and take too much on from the intensity of the work with her.  Two years ago I came back from her intensive with the head/neck pain that is now chronic, and this last time I came back and almost immediately developed respiratory distress.  Gratefully, I listened when she said she didn’t believe that to be true. In her4 view, we are all suffering, just as the earth is suffering.  In a recent, deeply moving and troubling article, she labeled if “extinction illness.”

I understand that redwood trees are resistant to fire.  Sequoias actually use fires to open their seed cones, release their seeds, and clear the ground to geminate.  I hope to learn something from them.

At least, I know I can go out and breathe with the trees.

Posted by Maya Spector at 12:33 PM No comments: